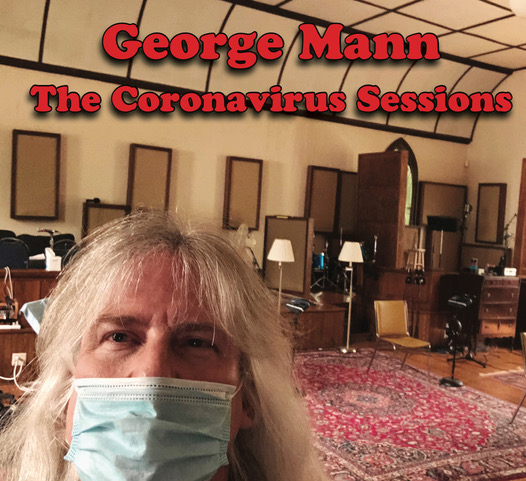 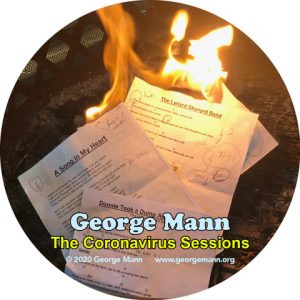 Right-click the panels to save/download

Click on the blue box to read lyrics, right-click to save

Click on the link to hear audio samples of the songs from the new CD at https://georgemann.hearnow.com/the-coronavirus-sessions

“Where Do Songs Come From?”

I’ve never been one to analyze or talk much about the songs I write. So much of it remains a mystery to me even now, as I complete “The Coronavirus Sessions,” my seventh solo CD since working with Julius Margolin for ten years producing labor and anti-Bush folk music and CDs. But I will try here to give you some info about where they came from, and how.

I can tell you that like any writer, I struggle all the time while writing and producing songs. And I go months without writing or even trying to write. But when it happens, the hardest part is getting one to the “starting line”— to that point where you know you are ready to commit it “to tape,” or, in today’s parlance, “to computer,” for “the record.” And over the last few albums, especially on this one, there are songs that have appeared literally in the 24 hours or so before they were committed to computer. Among them are “The Fish Always Rots From the Head,” “Donnie Took A Dump All Over Twitter,” and the final song on the album, “One Day You Just Wake Up and You’re Old.” And when I say “appeared,” I mean it. Sometimes they just come out of nowhere, and when that happens, it is always a special experience. Most of the songs I write, and most of the songs on this album, are “one-sitting” efforts… whether it’s two hours, four hours, or more of work, they eventually emerge and other than minor changes, are complete when I walk away from the writing desk and home studio. This is folk music, it ain’t Beethoven.

I am lucky to have always found musicians and singers who understand what I am trying to say and present in my songs, then take my often-unclear and vague direction and add not just their ample abilities, but their hearts, to what they put down. From the core “band” on these songs to my old friends and special guests, I couldn’t be happier with what they have brought to the album. And steering the ship, especially through these uncharted waters, were the steady hands and discriminating ears of Will Russell at Electric Wilburland Studios. Every album has its issues, periods of frustration and hard decisions, but this one seemed smoother to me, even with a four-month break because of the coronavirus shutdown. It gave me the time to write four more songs and complete the album. I don’t have much “in reserve,” though this time, we did leave two songs behind that didn’t seem to fit as well with this collection. Curiously, they were the first two songs I wrote “for” this album, so consider this the best of what I thought I could present. I also chose four songs from other writers that I love and wanted to record, and I’ll tell you more about them below. I include dates just so you can follow, if you want, the path of songs that came to me for this record.

A Song in My Heart: https://www.youtube.com/watch?v=wTAgkzRibHI

The Fish Always Rots from the Head: https://www.youtube.com/watch?v=k-J6qKN-fAk

My Name is George: https://www.youtube.com/watch?v=DUKJgQPI_BM

Which Side Are You On?”: https://www.youtube.com/watch?v=m_oXTPJpzdo

Videos for some of the songs on “The Coronavirus Sessions”

George has made video slideshows for some of the songs on “The Coronavirus Sessions” CD. Click on the links below to check them out!

A Song in My Heart

The Fish Always Rots From the Head

My Name is George

Which Side Are You On?

One Day You Just Wake Up and You’re Old

Here is a link to George’s YouTube channel: https://www.youtube.com/user/georgemannIWW 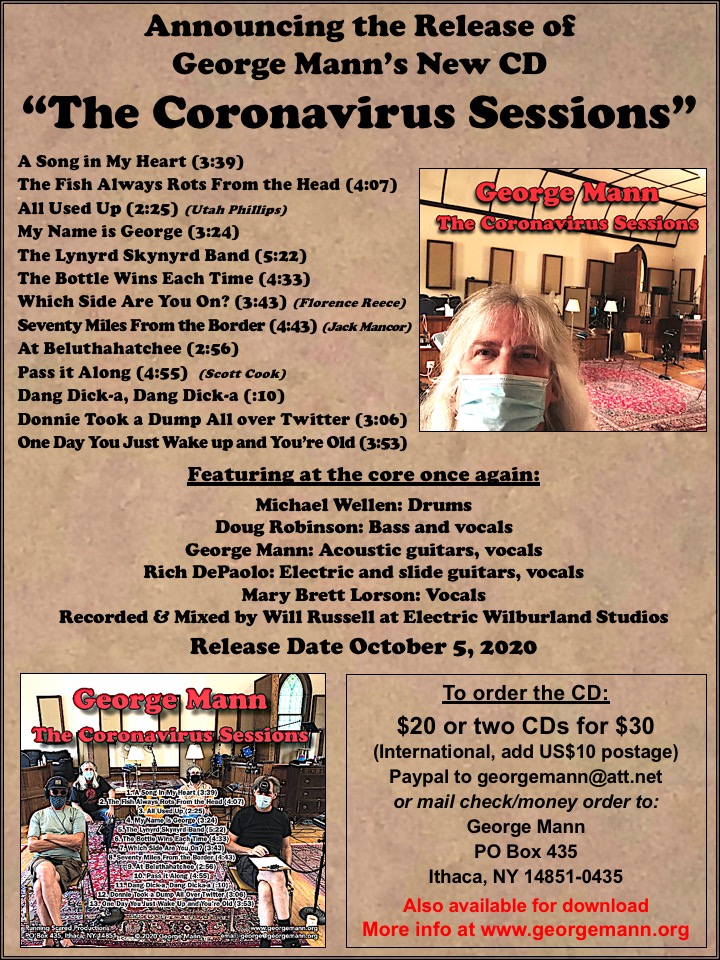 Right-click image to download, or here for the PDF