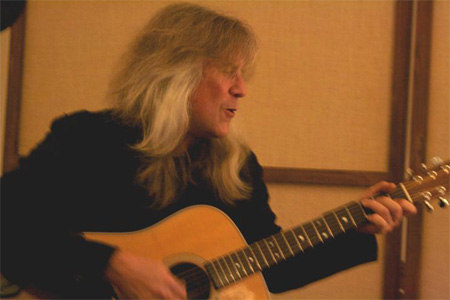 A former union organizer and activist based in Ithaca, New York, George Mann sings songs from the last century of the labor and social justice movements, and his own songs are powerful and funny takes on the state of the nation. His concerts are part sing-along, part history lesson, and he can make you shout for joy, send chills down your spine or bring tears to your eyes in the same set. He also specializes in historical and educational workshops/theme concerts and presentations on folk music, labor and social history, and some of our most beloved folksingers.

George created and produced the “Hail to the Thief!” anti-Bush CD series of protest songs, featuring such folk legends as Tom Paxton, Utah Phillips, and Billy Bragg, and his work with veterans, unions and anti-war groups has kept him on the front lines for more than 25 years. He recorded and toured for  ten years with Julius Margolin, who was 93 when he died in 2009, and in 2008 George directed and produced “A Union Man: The Life and Work of Julius Margolin,” a documentary film about Julius, a lifelong New Yorker, union member, and anti-war activist and singer.

He has a keen interest in labor and social history, and in 2013, George produced “The Almanac Trail,”   a CD that celebrates the music of The Almanac Singers and featured Pete Seeger narrating. He toured Australia, California and the Northwest twice in 2015, produced  31 concerts on the Joe Hill 100 Roadshow tours, and released “For the Road and The Sky” in October 2016.

While maintaining a touring and performance schedule of more than 200 gigs each year, including dozens of nursing and veterans homes, George has recently turned his eyes toward the nation’s veterans and the effects of two long wars on soldiers and their families. In 2016, he produced “Until You Come Home: Songs to Heal the Wounds of War,” a CD focusing on post-traumatic stress disorder and the human cost of war. It features songs by such artists as Utah Phillips and Ani DiFranco, Magpie, Roy Zimmerman, Joe Crookston, Joe Jencks, and John Gorka. “The Coronavirus Sessions,” his latest CD, was released in October 2020 and one year later, George is releasing “A World Like This,” a new collection of 11 songs featuring a wonderful band of Ithaca-based musicians.