Here’s a clip from the film:

A NOTE FROM GEORGE… 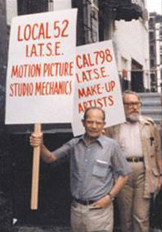 I met Julius Margolin in 1996 at the Great Labor Arts Exchange, an annual gathering and sharing of cultural work among union organizers, activists, musicians and artists that has been going on since the early 1980s. His gentle, unassuming manner belied a fierce and seasoned agitator and a passionate advocate for equality, unconditionally, for all people and races. And at 79 years old, he was just beginning to write songs and poems for the working class!

As we got to be friends over the next two years and he continued writing songs, I took notice of this diamond in the rough. He recruited me for the New York City Labor Chorus, which we both sang in for many years, and I got him to come to my jam parties, where we would trade songs and do group singalongs, a bunch of hip 30-something union activists and this 80-something veteran fighter.

When the time was right (as Julius was recovering from a blood clot and other maladies that almost killed him in 1998), I sprung the idea of playing music together and recording folk and labor CDs on him. I must have caught him at a weak moment because, while initially shy of his abilities, he agreed, and “Young and Younger,” both the name we billed ourselves as and the title of our first CD, was born.

Ten years, seven CDs and thousands of miles later, Julius is 91 years old and the years and the years are beginning to slow him down. But it is only his body that is failing him. His mind remains determined to make a difference, always interested in learning new things and never afraid of what’s ahead. Do not doubt that he has the same fire in his being, and whenever possible, he is out there on picket lines, attending rallies and marches, and singing for unions, veterans’ and nursing homes, and anti-war groups and gatherings.

We’ve had many great roadtrips and played and recorded some great music. But I know that nothing lasts forever, and there will come a time when Julius is no longer able to give us his measured wisdom, share experiences of the Great Depression, World War II and the blacklist, and inspire us by the simple presence of a 91-year-old radical whom, every time you see him, you just want to hug to pieces.

I made “A Union Man” in order to leave a reminder of this passion for activists, and especially those hardworking but rarely honored rank-and-filers, worn down by the sheer mass of the deck that is stacked against us. To remind people that you can hate the bosses and the system while still holding so much love for the working class and the struggle itself. And to keep Julius’s voice and presence around long after he has left this life and the imperfect world he worked so hard to make a better place.

There is so little labor history taught in our schools, so little told of the often brutal struggles of working people to shake a fair wage, decent and safe working conditions, and security from the capitalist system and the government that promotes and protects it. Julius has always shown special interest in young workers, students and activists, educating and encouraging them to learn more about our history and the battles that have been fought. I’ll never forget that the first gift he gave me, just a month after I met him, was a copy of the great history book “Labor’s Untold Story.” Turns out he had bought a bunch in bulk and was giving them to young people he deemed open and interested in learning more about labor history. I am thrilled that he thought me worthy of receiving one.

Julius hopes that this film will be used at educational retreats, for relief from the occasional tedium at days-long conferences, for social gatherings or “film nights” among progressive organizations. And I want the film to make it into libraries and the classroom, to inspire people to learn more, work harder for justice, and love everyone around them just a little more. I hope “A Union Man” shows, among other things, the degree of love and admiration that so many people, of all ages, feel for this man. We made it short (56 minutes) and snappy for a reason. We want you to want more. And we want you to go out and live with that same energy, and anger, that Julius has lived with….

A tribute to Julius