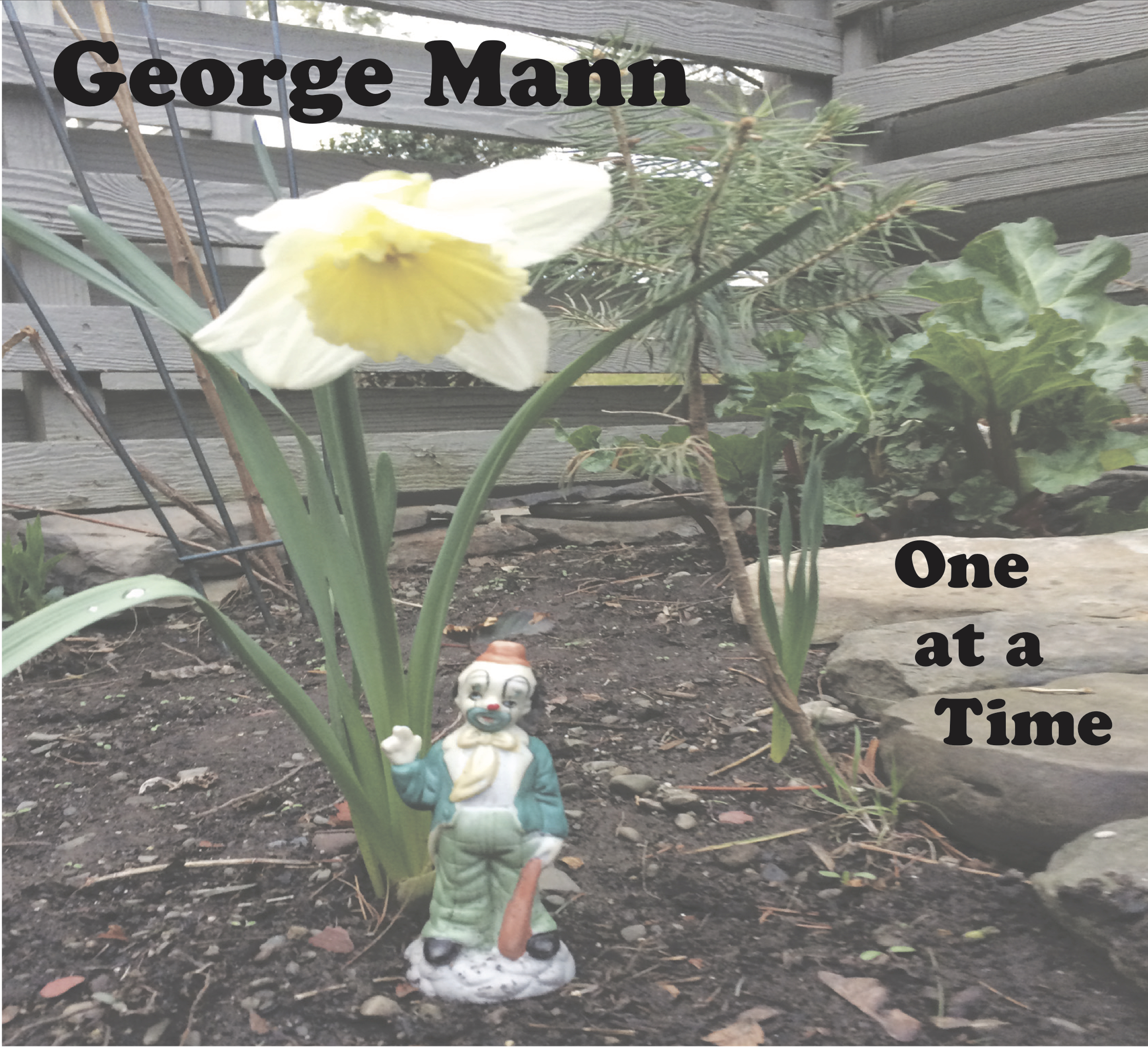 ONE AT A TIME 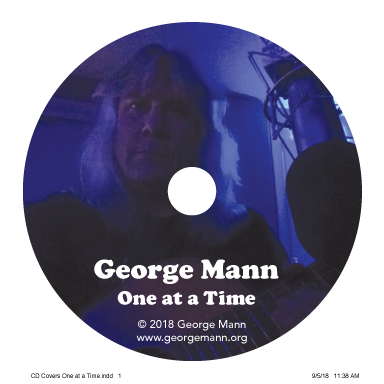 The Pickers and Grinners

Produced by George Mann, with invaluable input, a warm environment, and good coffee provided by Will Russell.

Recorded and engineered by Will Russell at Electric Wilburland Studios in Newfield, NY.

Basic tracks for tracks 2, 3, 5, 8, 9 and 10 were recorded and engineered by Marc Urselli at Wilburland,

with additional recording by Will Russell.

Mixed by Will Russell and George Mann at Wilburland, August 2018.

Mastered by Dana Billings and Will Russell.

Click below to stream songs from the CD on Spotify.
You can order the CD online or directly from George at: shop.georgeandjulius.com
Listen to sample songs

A brief description of the songs on “One at a Time”

I’m not very good at explaining my songs. Most of them speak for themselves… 🙂

No real hidden meanings or fancy lyrical twists. This was the first time that I began the process of recording a new album without a clear sense of what was going to be on it. Besides the three “cover” songs, I only had three originals ready to go, and one of them was an old one (“Every Loser Was Someone Once”). But I got together with Doug Robinson and Michael Wellen, and we hashed out the rhythm tracks for the first three songs.

I was excited to be working with an old friend and master recording engineer, Marc Urselli, who came in to record the basics for the first six songs. And over the next 4 months, the new songs came, we sweetened the tracks with the wonderful additions of Mary Brett Lorson and Rich DePaolo, among others, and the album was born. Will Russell, owner of Electric Wilburland and a real good egg, labored like never before to give me what I wanted in both the recording and mixing phases. And while at times it seemed like pulling teeth, the sounds we came out with were always pleasing. Here’s a brief rundown of each song.

#1. Did It Really Happen Here?:  I had this melody in my head for a month or so before the school shooting In Texas that brought this song out. I didn’t know it at the time, but I think it was leading the way for this song, since we’d already had one major school shooting in Florida on Valentine’s Day. I figure we need a song for the next mass shooting, as will inevitably happen, so here it is. Mary Brett Lorson sets the stage for her presence on the album in the beautiful ending to the song.

#2. 1960s Holiday:  I still don’t know how or why it happens, but this came out the morning of the recording sessions for the rhythm tracks on the first five songs, including three featuring Doug Robinson on bass and Michael Wellen on drums… I wanted to squeeze in one more song, if we were going to be recording and spending the day setting up the full band, and recording basic tracks with my old friend Marc Urselli! So I whipped this together that morning, and toward the end of the afternoon, after we had gotten good takes of the first three songs, I showed it to Doug and Michael… and we laid it down. A homage to “The Band,” in a way, and the music of the late 1960s. I still love strapping on an electric guitar and cranking it up….

#3. We Have Fed You All For a Thousand Years:  I am proud member of the Industrial Workers of the World (IWW), and while I sing many of the IWW classics, including a few by Joe Hill, this song, with words written by “an unknown proletarian,” appeared in the 1919 edition of The Little Red Songbook. I’ve always considered it one of the most powerful of the Wobbly songs. My first time playing dulcimer on record… this songs kicks ass for the working class!

#4. Nothing Left to Say:  This is one of those stories that needed no embellishment. Jim is still alive, and I still see him occasionally and sing to him as of early 2019. Marty Confurius laid in some beautiful cello parts on this one.

#5. There Is Nothing Like a Mother’s Love:  The inspiration for this song is not just from my own experience, as my mother is beginning to show signs of dementia… but I was actually introduced as “my son” by one of the residents in a home I sing in…. to her daughter. We just went along with it that day, and I was glad it was a daughter, and not a son, she had said this to. Imagining, and seeing, the slow deterioration that is dementia, and Alzheimer’s disease specifically…. Rich DePaolo brought the chime to this song with some beautiful guitar work, and Terry Burns and Mary Brett Lorson sang some beautiful harmonies.

#6. How Can I Keep from Singing?:  I always associate this song with Pete Seeger, whose version has such power. But the song goes back centuries, and the third verse, added by Doris Plenn during the McCarthy Blacklist era, reminds us that many people have sacrificed for the freedoms we have today. I used Julius Margolin’s nylon-string guitar for several of the parts on this song, I love the tone of that old instrument.

#7. Oklahoma’s Son:  I wrote this twenty years ago, and while I was struggling to write new songs for this album, I kept coming back to this song and wondering why I had never really sung it much after it appeared on the first album I made with Julius, “Young and Younger.” On Woody’s birthday, July 14, 2018, I was booked in the studio, and recorded this. Kept it pretty bare, adding Julius’s nylon string for the solos. Both Woody and Julius’s spirits seemed to be in the air that day.

#8. I Don’t Know How We Made it Home:  I was in Australia, playing the Illawarra Folk Festival, one of my favorite places in the world to be…. Five days in the same location, camping out with friends and playing/listening to music for five days and nights straight! I knew I’d be starting recording sessions for the new album in the coming months, upon my return from this short tour of Australia… and Scott Cook, a wonderful songwriter, was singing songs of youth, struggle, and hope, as he is wont to do. Inspired by Scott, who makes it look so easy, I wrote this song at my camp one morning… thinking back to the night my old friend Tom Gill intervened at the right moment.

#9. This Island Ain’t Big Enough:  This is a portrait of the end of a relationship, one that once involved much love. It is not my story, but one I witnessed. Marc Urselli recorded the basics for this track. Every time I hear this song, I fall in love with the sound of the acoustic guitar… my Martin HD-28VS… it captures the mood just perfectly. And Mary Brett Lorson added some beautiful harmonies.

#10. Every Loser Was Someone Once:  Another old song, once that I had recorded way back in 2000, but never felt had been done justice. The band sounds great on this one…. Mary Brett Lorson and Rich DePaolo both shine—when mixing the song, Will Russell and I kept playing them up against each other, especially in the solo parts…. I think Mary won in the end, but Rich gets an honorable mention!

#11. Hood River Roll On:  Bruce “Utah” Phillips will always be an inspiration and guiding light to me as a musician and human being trying to make this a better world. I’ve always loved this song, written for “Hood River Blackie,” one of the grand dukes of the Hobo Convention, and a man Utah credited with saving his life when Utah was a young hobo, inexperienced and troubled by his experiences in the US Army. Special guest appearance by Slick Willie Rustell on the harmony vocals.

#12. Fishing at the End of the World:  The album was almost done…. We were beginning the final mixing process. And as usual, I was feeling there was more to say, and that it would be at least another year or so before I’d be saying anything again on record… as with just about all my songs, this came out in one sitting. We brought it into the studio the next day, Mary Brett Lorson sweetened it with her sweeping harmonies, and the album was finished!

George has created little videos, often just collages of pictures,
for some of the songs on the new CD.
Check them out! Many of them features George’s friends and mentors in the folk music world.
Click on the links below to listen and watch:
“Did It Really Happen Here?” and “1960s Holiday”
The first two songs on the new CD!
“We Have Fed You All for a Thousand Years”
“Nothing Left to Say”
“There Is Nothing Like a Mother’s Love”
“How Can I Keep from Singing”